After completing his Bachelor of Arts and Master of Arts degrees in Speech and Drama, Burton became a teacher and Chairman of New York Speech and Drama Department.  His love of teaching still continues, now as a College Professor instructing advanced courses in Theatre and Speech.  The Artistic side of Burton Wolfe's career has been as Author, Artistic Director and Producer of Peforming Arts and Special Events.  Burton has been producing theatrical works, international events and cultural exchanges for over two decades.  His passion is to prodduce, write and direct musical and theatrical productions that contain a wide range of styles and subject matter.  The musicals he has directed have received outstanding reviews including: Miss Saigon, A Funny Thing Happen on The Way To The Forum, West Side Story, Cabaret and many others.  Mr. Wolfe has had the privilege of working with renowned celebrities: Audrey Hepburn, Helen Hayes, Mickey Rooney, Julio Iglesias, Willie and Lobo and many more.  Wolfe's national and international experience includes producing international Cultural Exchanges, Festivals and diverse Educational Programs.  Over the past years, Burton has received the following recognitions for his works: Gold Metal from the Peoples Republic of China for his musical theatre lyric writing, "Outstanding Arts Leader" Award from the Sarasota County Art's Council, from Natural Awakening Magazine "The Bridge Builder Award," from West Coast Center for "Human Development, Awardfor Actively Supporting and Promoting Productions that enhance Diversity in the Arts."

The Mayor of Houston, Texas called Mr. Wolfe's Cultural Exchange "A Breakthrough Event." The Mayor of Boca Raton, Florida, said "Burton Wolfe has brought Theatrical Magic to Boca Raton...." Burton Wolfe spearheaded "AsiaFest"  in Miami with the participation of performing artists and business leaders from nine Asian Nations.  The Festival was acknowledged by President Ronald Regan as "Strengthening the ties between the Pacific Rim and the United States."

Burton believes in producing culturally diverse theatrical presentations that are entertaing as well as enlightening to support global Peace and Prosperity. 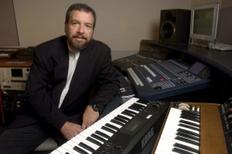 ​Letter From The White House

Scott Gehman - Member of the Board of Directors, Music Director, Composer of Music & Orchestrations
Dr. Gehman studied music at HSPVA, North Texas State and holds a B.M, M.M, and D.M.A from the Shepherd school of Music at Rice University.  Prior to his faculty position at HCC, Scott served as Music Director for Strake Jesuit College Preparatory; was Director of Houston's Summer Jazz Workshop; and taught electronic music at Rice University.  He has held positions as Special Assistant to the President and Head of the Audio Recording and Film Making Department at Houston Community College.  Currently Dr. Gehman is one of the HCC pioneer professors working at Houston Community College in the Sovereign Arab State of Qatar.
Scott has composed music and orchestrations for theatrical musicals over the past twenty years.  His collaborations with Burton Wolfe include: the musical adaptation of Paul Dukas' Sorcerer's Apprentice which toured Houston and Beijing; his music and orchestrations to The Legend of Yin  & Yang, matched to Burton Harold Wolfe's book and lyrics, created the first Sino- Caucasian musical ever produced in South China and was documented in a PBS Television production: "Making The Legend."  Recently Scott and Burton have completed Metropolis ! and Kung Fu Hero.  Both  have been embraced by audiences and critics alike.

​Lawrence Wong - Vice President, Director of Operations
Prior to residing in North America, Lawrence Wong began his career in the Hong Kong Hospitality Industry.  His executive positions and skills have been in Operations as well as Sales and Marketing. Lawrence has worked with several international corporations including the Hong Kong Tourist Association, Sheraton Hong Kong Hotel and held managerial positions with JW Marriott Hotel and the British based reservations system, Utell International.  After Lawrence migrated to Toronto, Canada, he held the position of Director of Operations for New Century Travel where he was soon promoted to the position of Vice President. Lawrence supported the expansion of the NCT reputation by bringing Hong Kong stars: Leon Lai, Sam Hui, Roman Tam, Sally Yeh, Jackie Chan and others to Toronto for Celebrity Performances. Over the past decades, Mr. Wolfe and Mr. Wong have co-produced Musical Theatre, Dramatic and Comedy works, Children's Theatre, Pop Concerts, Cultural Exchanges, International Festivals and Educational Programs along with diverse world class Special Events.  As Directopr of Operations, Lawrence has supervised all of the logistics for productions and events.  Together Burton Wolfe and Lawrence Wong have produced over 50 popular Broadway Musicals along with dramatic and comedy shows; and over  50 Special Events representing thousands of performances.  Lawrence is grateful that through his work, he is able to bring multicultural events to entertain and educate diverse audiences.